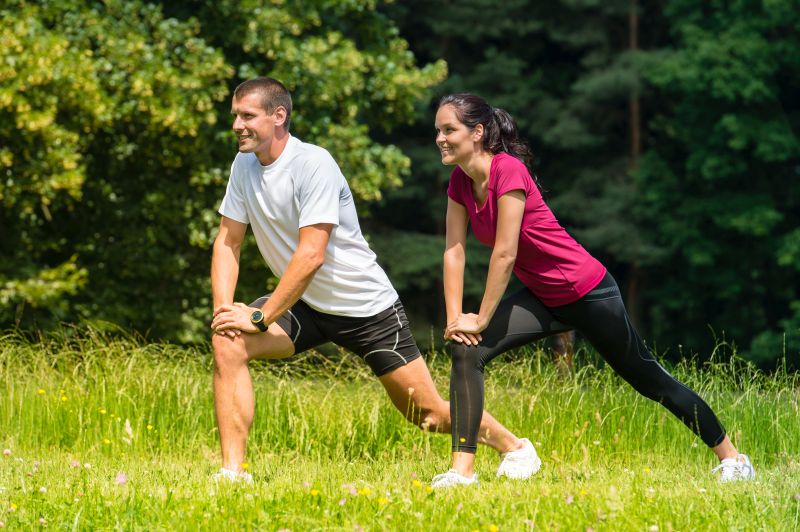 Those of us on the high side of 50 can remember back to gym class in school, the ultimate Throwback Thursdays and Flashback Fridays. The phys. ed. teacher would have us do a few toe touches, windmills and trunk twisters to get us loosened up and flexible regardless of what exercise activity was to come next.

Sometimes it would be a game of kickball, a dreaded day on the trampoline or perhaps eight laps encompassing 32 ninety-degree left turns around the basketball court for the 600-yard run portion of the annual President's Physical Fitness Test. That pre-workout stretching routine was what we were taught, and that's the "warmup" many of us were still doing years later when we joined the running craze of the 1970's and beyond.

Yes, ancient history, although we thought we knew what we were doing, even when we didn't.

Today's stretching debate when it comes to running is whether to stretch before or after the run. Experts now say that doing toe touches, quad stretches and other static stretches pre-run is potentially more harmful for us than not stretching at all. Better that we do the static stretches, if at all, we are told, after we run.

In a 2014 report on stretching and running, ABC News referenced a Centers of Disease Control and Prevention analysis of studies that said runners who stretched pre-run were beset by injuries as much as runners who skipped stretching. Another study centering on serious male marathon runners found that those who stretched before or after a run had a 33-percent higher incidence of injury than those who didn't. The threat of injury isn't the only factor here; still other studies have shown that pre-run static stretching can also diminish performance, such as slowing down sprinters coming out of the blocks.

"Your tendons don't need to be that pliable for running," ABC News quoted Jason Karp, a San Diego-based exercise physiologist and running coach. "Most injuries are from the pounding of running, something stretching can't do much about."

William O. Roberts, a runnersworld.com columnist and University of Minnesota Medical School professor, breaks it down to an even simpler level: "If you can run comfortably, and without injury, there is no need to stretch."

In questioning the benefits of pre-run stretching, however, experts are not suggesting that it is best to do a hard running workout or even a 5K or marathon without any sort of warmup. The idea is to ditch those static stretches where essentially you remain stationary – save them for after the run or race – and instead engage in a "dynamic" pre-run/race workout that utilizes all of your leg muscles. That includes hips, quadriceps, hamstrings, inner and outer thighs, and calves through their full range of motion. Think walking lunges and leg swings, for starters.

"Dynamic—that's in motion—and static stretching is an essential part of any runner's training program," USA Track & Field certified run coach Meghan Kennihan says on active.com. "Dynamic stretches activate and loosen all your leg muscles, preparing you for your run. Static stretching at the end of your run can bring your heart (rate) down, cut your risk of injury and lessen muscle soreness."

Take it a step further and incorporate the dynamic warmup into the run itself, Michele Olson, PhD, a college professor of exercise science, says on shape.com: "Start out by walking and trotting; swing your arms; shrug your shoulders and slowly elevate your heart rate for about 10 minutes before you pick up your pace."

Then, once the run is over? Try stretching your workout, with some static stretching, adds Lynn Millar, PhD, a physical therapist and Winston-Salem State University professor, quoted on webmd.com: "Everyone is more flexible after exercise, because you've increased the circulation to those muscles and joints, and you’ve been moving them."

Just like in the old days. As always, consider consultation with a health care or fitness professional before drastically altering your workout regimen.