Pumpkin Seeds Can Sprout Health Benefits for You 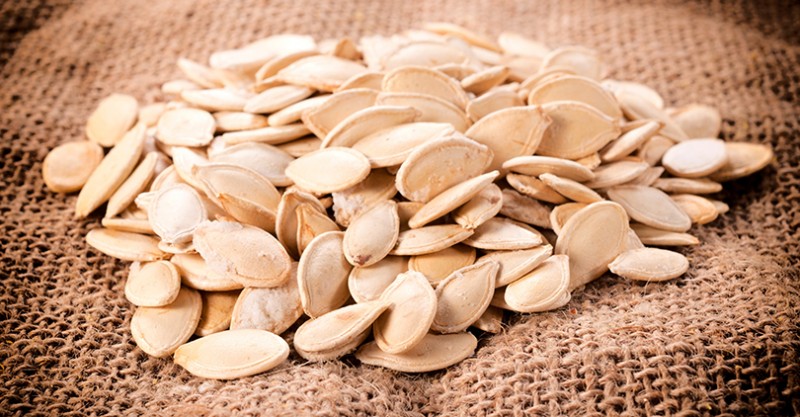 With Halloween just a couple weeks away, what better way to conclude this three-part series on nutritional seed supplements by carving out some time to talk about pumpkin seeds? One good thing to know about pumpkin seeds right off the bat is that they are alkaline-forming, per care2.com, which means consumption of them can go a long way toward balancing out your body’s pH levels in a world full of acidic foods. Think, for example, gooey or hard candy that will make its ways into millions of kids’ trick-or-treating bags.

Something else of note about pumpkin seeds is that they actually improve with age – the longer they are around and the more they decompose over time, the healthier they become in terms of nutritive value. Also per care2.com, tests conducted at the Massachusetts Experimental Station found that squash and pumpkin seeds stored “for more than five months showed a marked increase in protein content.” So, got some old pumpkin seeds sitting around? Hang onto them or, better yet, toss them into your mouth right now.

A Brief History of Pumpkin Seeds

We know that flaxseeds have a nutritional history dating back some 6,000 years, but pumpkin seeds may go back even several millennia longer, with such seeds being discovered by archaeologists in Mexican caves dating back to 7000 B.C. They are a trademark of Mexican cuisine and were also very popular in ancient Greece, per care2.com, which is not a surprise considering how they can benefit our health. Speaking of which . . .

Whether freshly bought, aging in a cupboard, or on the verge of total decomposition, pumpkin seeds can benefit your health. These seeds – which are green, flat, oval, and don’t come in shells, per healthline.com – provide an abundance of fiber, protein, and healthy fat (omega-3s), with one ounce of pumpkin seeds working out to about 150 calories. Following is a rundown of some of their potential health benefits: