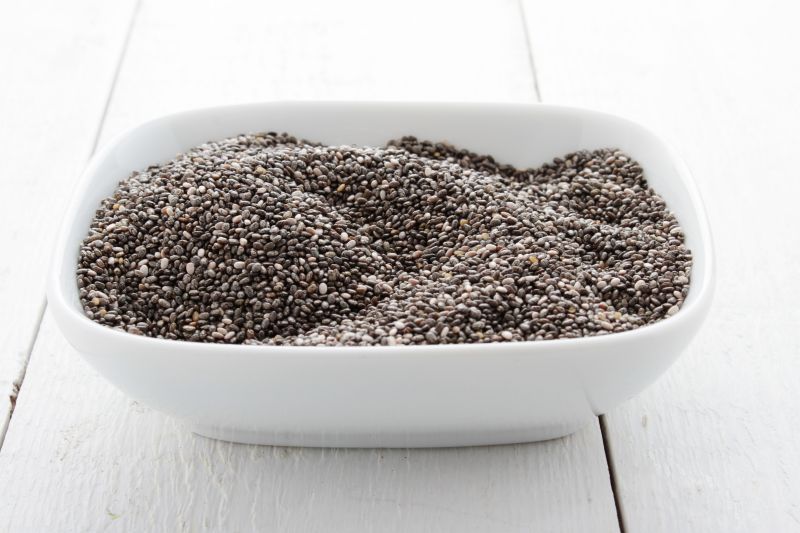 Chia seeds are a relatively new nutritional craze, or so you thought. What many folks might not know is that these edible seeds, which come from the desert plant Salvia hispanica, found in abundance in southern Mexico, have been around for several thousand years, dating back to the ancient Mayan and Aztec cultures. The small black and white seeds were consumed for their energy-boosting qualities, which makes sense when you realize that these little buggers contain healthy doses of omega-3 fatty acids, carbohydrates, protein, fiber, antioxidants and calcium.

Clearly, chia seeds epitomize the notion that good things come in small packages. According to NutritionData.com, a one-ounce serving (137 calories, 72 from fat) provides a full 42 percent of the recommended daily value (RDV) of dietary fiber as well as 18 percent of the RDV for calcium. High-fiber diets have been shown to not only decrease pressure and inflammation in the colon while promoting regularity for a healthy digestive tract, it also could aid in weight loss by helping you to feel full longer.

Increased fiber consumption, as reported by medicalnewstoday.com, has shown through dozens of clinical trials the capacity to lower blood pressure, reduce cholesterol levels and decrease the risk of developing diabetes. As for the plant-based omega-3's contained in chia seeds, it is believe they can lower LDL (bad) and total cholesterol and reduce atherosclerotic plaque, among other benefits. The list goes on.

So, how does someone go about preparing chia seeds for consumption, beyond pouring them into a cereal bowl and scarfing them down with a spoon (definitely not recommended, as will be explained in a jiffy). Without getting too much into recipes, menus or hours spent in the kitchen, the seeds, which have a mild, nutty flavor, work well as a condiment, sprinkled on that morning bowl of oatmeal, or added to sauces, vegetables and yogurt. They can also be mixed into drinks and baked goods such as bread and muffins. However you plan to use the chia seeds, they can be found in many supermarkets – be sure to ask for help the first time if you're not sure where to look for them.

One of the more interesting characteristics of chia seeds is their capacity to absorb water – up to 27 times their weight. By mixing the seeds with water – a ratio of 3-to-1, as in three tablespoons of water for each tablespoon of chia, according to medicalnewstoday.com – and then letting it sit for several minutes, voila, you now have a gel made all the more tasty by adding flavoring in the process. Noted holistic health authority Dr. Andrew Weil, writing at drweil.com, points out that this reaction can also take place in the stomach, thus retarding the process "by which digestive enzymes break down carbohydrates and convert them into sugar." The gel also makes a nice substitute for eggs in baking.

This brings us to the down side of chia seeds: if you aren't careful, and this goes back to the earlier reference about not eating spoonfuls of the seeds, especially if you plan to chase them with water. The gel-forming potential can work quickly and clog your throat or esophagus, as reportedly happened to one man who had a pre-existing swallowing issue. He tried to wash down a spoonful of chia seeds with a glass of water, resulting in an esophageal obstruction.

Such incidents are rare, of course, but that is one reason why parents are cautioned to keep chia seeds away from their young kids. Also, the Cleveland Clinic for Wellness has advised against consuming chia seeds if you are on a blood thinner; similarly, patients on blood pressure medicine are encouraged to proceed with caution. Consulting with a health care professional is always a safe route to proceed. Once you get the green light, though, eat up!