Let Spinach Put Some Pop(eye) in Your Diet 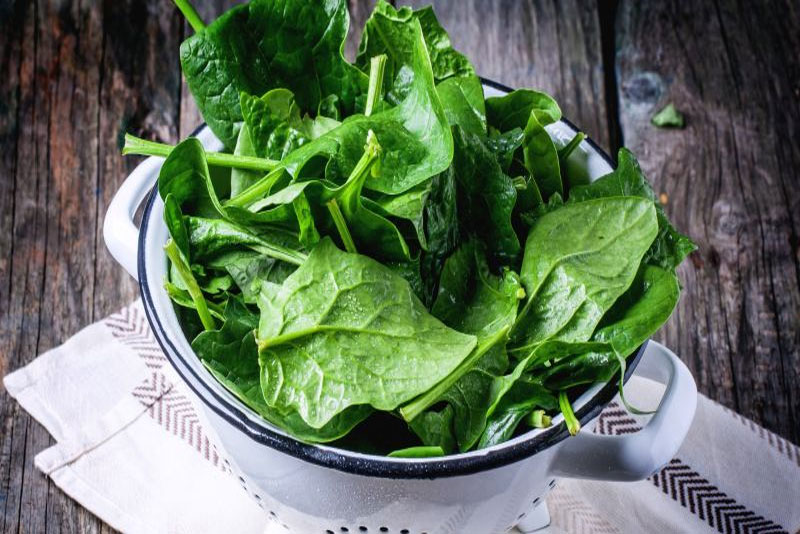 Those of us of a certain age don’t have fond memories of as kids coerced into eating spinach, especially when it meant staring at that icky, yucky green stuff passed off as hot lunch in schools decades ago. All that started to change, though, once we were exposed to its positive attributes via the superhuman exploits of a squinty-eyed, canned-spinach-guzzling cartoon sailor man by the name of Popeye.

Now that we reside in the ultra-health-conscious 21st century, spinach in its various cooked or raw states not only has become edible to us overgrown kids, it has emerged as a dietary superstar. This is in a world where terms such as iron; vitamins K, A, C and D2; folic acid, manganese and magnesium – all found in spinach – ring familiar to health-savvy parents, health care professionals and nutritionists alike.

Dare it be said that spinach is no longer trending as tony but has now secured a spot on plates at lunch and dinner tables across America. In terms of in vogue green vegetables gaining in popularity, that baton has been handed off to kale, a relatively new discovery in grocery produce departments that, like spinach, packs a punch in numerous nutritional areas. We’ll come back to kale in this space at a later date.

How do we love our spinach? Let’s count the ways. Nutritional therapist Jo Lewin, writing at bbcgoodfood.com, sums it up like this: “It is well known for its nutritional qualities and has always been regarded as a plant with remarkable abilities to restore energy, increase vitality and improve the quality of the blood.” Medical News Today gets a bit more specific, praising spinach for its benefits relative to diabetes, blood pressure, cancer, asthma, bone health, promotion of regularity, and, for good measure, healthy skin and care.

Downing a can of spinach won’t give you instant Schwarzenegger biceps or calves, or, like it did with Popeye, turn a mouth-held pipe into a spinning propeller capable of launching our beloved swabbie like a human torpedo. A diet, though, with a consistent dose of spinach can help make up for past mistakes in substance consumption. Note: according to nutrition data, a one-cup serving (30 grams) of raw spinach has only seven calories (one calorie from fat), zero grams total fat and zero cholesterol.

The Nutritional Benefits of Spinach

So, from where else does spinach get its wide-ranging assets? For one thing, according to Lewin, it contains an abundance of iron that "plays a central role in the function of red blood cells which help in transporting oxygen around the body, in energy production and DNA synthesis." Another is that it provides what WH Foods describes as health-supportive nutrients known as "glycoglycerolipids," which in lab animals has been shown to "protect the digestive tract from damage," such as unwanted inflammation.

Another of spinach's many other pluses is its antioxidant capacity. That's thanks to health-promoting phytonutrients such as carotenoids and flavonoids, all of which contribute to WHFoods's assessment of spinach as No. 1 on its list for healthiest vegetables in terms of nutrient richness.

The best part about spinach is that its widespread acceptance among all health-minded age groups has inspired culinary experts to develop dozens of uses and recipes that endear spinach to the palate. Think of the various compositions of spinach artichoke dips found on appetizer menus in restaurants, or delightful spinach lasagna and even a spinach pie! Of course, many salad makers now commonly use spinach leaves in place of lettuce or cabbage. There are even smoothies being made that contain a good helping of spinach.

No longer does it take joining the navy or busting open a can to eat spinach to your heart's delight.