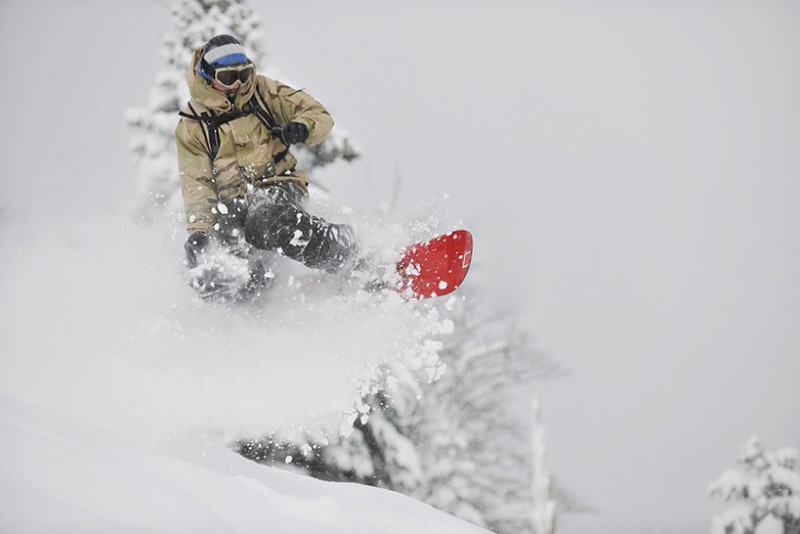 Any sports-minded person who has grown up or otherwise lived a long time in a climate known for its abundance of snow and ice knows all about bundling up against the winter chill for months at a time as well as the rigors of shoveling an overnight dumping of snow on sidewalks and driveways. Yet such a life can provide a "winter wonderland" as well, where skiing, snowboarding, skating, ice hockey, sledding, tobogganing, snowmobiling, etc. can provide hours of sheer delight.

Unfortunately, there's an element of danger lurking in such activities, and the injuries can be devastating, even fatal, regardless how much care you exercise. In recognition of this, January is Winter Sports Traumatic Brain Injury (TBI) Awareness Month, and it's a call for public awareness not to be taken lightly. Even the Centers for Disease Control and Prevention (CDC) has gotten involved, partnering with the likes of USA Hockey and the U.S. Ski and Snowboarding Association, and numerous other sports organizations, to educate the public about sports-related concussions.

Many outdoor winter activities involve significant amounts of speed, the potential for collisions with unforgiving objects (i.e. trees, ice or other skiers for skiers; sideboards, goal structures, ice and other players for hockey layers). Occasionally poor visibility, and essentially defenseless human bodies (save for helmets worn some of the time by some competitors).

Take skiing (yes, on snow) for example: It doesn't take a spectacular crash of a downhill racer traveling at 80 mph to produce the kind of brain injury that severely injures the skier—let alone cripples or kills him or her. Even a relatively innocent-looking spill on a snow-powder-covered slope sans ice can be gravely serious.

Such was the case in 2009 with actress Natasha Richardson, wife of movie superstar Liam Neeson, who took a tumble on a beginner's slope during a lesson at Mont Tremblant Ski Resort in Quebec, Canada. She was attended to by ski patrol personnel, but essentially walked away from the mishap, only to start experiencing headaches about an hour later back in her hotel room. Despite being rushed to a series of hospitals, Richardson was dead within hours.

While tragic, Richardson's death years later still serves as a wakeup call and cautionary tale to millions of others who ski, skate, snowboard or whatever—there is no such thing as a minor head injury—at least that's how all should be treated until proven differently. "People don't realize the fragility of the brain and just how common brain injury is. Natasha Richardson’s example sadly shows how devastating an innocuous brain injury can be," David King, executive director of the Minnesota Brain Injury Alliance, told minnpost.com soon after Richardson's death.

As minnpost.com describes it, our brains are like hardened Jell-O that's inside a skull that on the inside is lined with sharp nodes and ridges, which can be damaging to the brain when thrown again this skull interior by an accident or fall. "You can have rips, tears or bruising," King said. Internal bleeding and/or swelling, not visible from the outside can start slowly, with symptoms such as headaches, dizziness, etc. not showing up until thirty or more minutes later. Note, too: TBI often is misdiagnosed, which can lead to complications or even the death of the patient, per consumerhealthdigest.com.

Wearing helmets are no guarantee of full protection, either. Case in point: when Boston University helmeted hockey player Travis Roy crashed headfirst into a rink's sideboard during a game in 1995. The collision shattered his fourth and fifth cervical vertebrae, according to bu.edu, and severely damaged his spinal cord, leaving Roy paralyzed from the neck down. Roy, 18 at the time, suffered the career-ending injury just 11 seconds into his first shift in his first game as a freshman player at BU.

Snowmobiles are a vehicle for traumatic brain injuries as well. A former golfing acquaintance of this blog's author was left a quadriplegic when involved in a snowmobile accident in Vermont.

According to cortechsnews.com, winter sports brain traumas rank among the top 10 types of head injuries treated in emergency rooms across the country. In 2009, the Consumer Product Safety Commission estimated that winter sports activity produced more than 20,000 ER visits that year, with a belief that such numbers increase annually.

Ample recent attention has been given to the cases of CTE (chronic traumatic encephalopathy), a progressive degenerative brain disease associated with repetitive brain trauma, such as concussions. Most of that attention has been focused on football, particularly the National Football League. CTE is a serious concern in winter sports as well.

Regardless the sport or the season in which it is played, if an activity results in what is believed to be a possible concussion of, worse, TBI, medical attention should be pursued immediately. Symptoms of a possible TBI, per lifespantherapies.com, include the following:

You've heard it here before, but it bears repeating: Let's be careful out there. Give your brain some TLC, and that includes protection.