How to Relieve Sinus Congestion, Even During Allergy Season 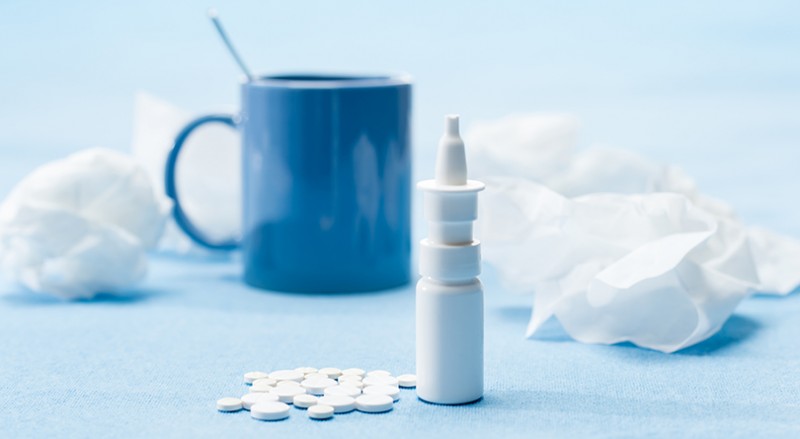 Mention ‘sinus congestion’ or ‘stuffed-up nose” to someone, and odds are they picture biting cold in the dead of winter, while trying to ‘honk’ the contents inside their frozen nostrils into a folded handkerchief held between hands bundled in mittens, each breath visible in the frosty air. But sinus congestion can rear its annoying symptoms almost any time of year, and certainly during spring allergy season, when a mere runny nose can become a congested one fairly quickly.

Not only that, but some allergy seasons are worse or at least different from others, such as when that congestion is preceded, accompanied, or followed by drainage that can produce a hacking cough just as annoying or at times debilitating as those itchy, watery eyes or sneezing fits that alternate turns with coughs.

What Is Causing that Congestion?

When you are congested, even the simple act of breathing can be a chore. Whether the source of the congestion is a sinus infection, allergies, a cold, or the flu, sinus congestion can really clog things up for you and leave you feeling tired, dreary, and pretty much unfit for fun or a fully productive day at the office.

Many things can cause nasal congestion, doing so by irritating or inflaming the nasal tissues, whether it be a cold, flu, or allergies, per mayoclinic.org. Or it could be an airborne toxin such as tobacco smoke, the exhaust from a car or truck, or pollutants billowing out of industrial smokestacks.

Furthermore, it isn’t just the mucus inside your nose that is clogging the passageways and making you talk funny (assuming you even feel like talking at that point). Also blame it on the blood vessels that are at work in and around your nose. “The nose has a vast network of blood vessels with valves that open and close,” says Dr. Scott P. Stringer, a University of Mississippi Medical Center professor, quoted at everydayhealth.com. “When the nose is stimulated by any irritant, the nervous system is also stimulated, causing valves to open, which results in more blood entering the nose. This causes swelling in your nasal passages, which makes it difficult to breathe.”

There are an assortment of decongestants on the market – some available via prescription, others over the counter – and while many have proven effective, not all decongestants are for everyone. If you have hypertension (high blood pressure), for example, you are advised to steer away from decongestants containing compounds such as pseudoephedrine, ephedrine, phenylephrine, naphazoline, and oxymetazoline, all of which can raise blood pressure. These narrow (squeeze) blood vessels, which in turn can affect other blood vessels and raise blood pressure, per mayoclinic.org.

A viable decongestant alternative are homeopathic products, which consist of natural substances with no apparent side effects, yet with proven effectiveness at ridding your nostrils of congestion. There are different homeopathic remedies for individuals, depending on their particular symptoms, with factors such as the side of nose blockage (perhaps both even), the time at which blockage is at its peak, and the character of nasal discharge, per mayoclinic.org.

One viable homeopathic remedy is Wonder Labs’ product known as Phytofed®-HF, which is comprised of an all-natural homeopathic formula that includes eyebright extract, nettle leaf extract, golden seal extract. grape seed extract, and echinacea extract, each of which plays specific roles in curbing the various symptoms related to nasal congestion and other allergy symptoms.

Following are some practical means for getting congestion relief without having to get a prescription or even visit a pharmacy. Some of these might only provide temporary relief, although such interludes to an otherwise miserable condition can go a long way to making congestion at least somewhat tolerable: