Could Heartburn Relief Affect Your Body's B12 Absorption? 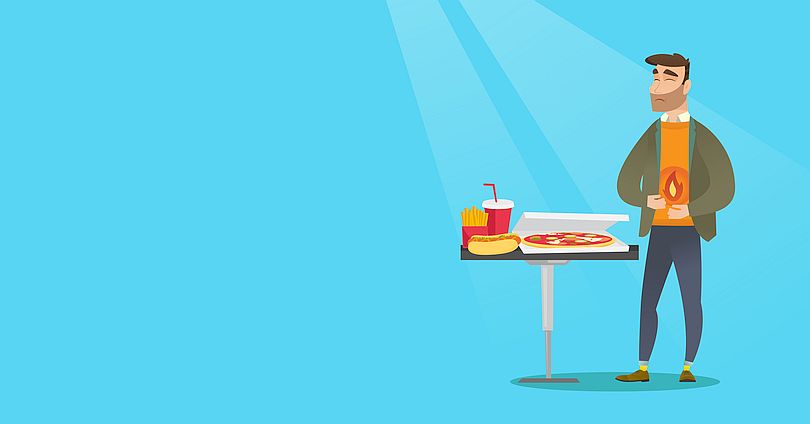 Previously in this space, we discussed vitamin B12 and the important roles it plays on multiple levels in supporting our health. A deficiency of B12 can lead to all sorts of problems, starting on a basic level with tiredness, weakness, constipation and anemia, while a long-term deficiency can ultimately lead to nerve damage and dementia, even gait disturbance, among other life-changing conditions to be avoided.

Maintaining proper vitamin B12 levels can be accomplished with a healthy diet that includes meat, fish, and dairy products such as milk (for starters), along with a complement of dietary supplements containing vitamin B12, as needed. However, let’s bring to the mix a mention of a possible B12-deficiency problem that could arise if you are using medications to treat gastroesophageal reflux disease (GERD), otherwise known as heartburn or acid reflux. Symptoms include indigestion, a burning pain in the lower chest typically accompanied by a sour taste in the mouth, and, sometimes, vomiting, per livestrong.com.

Such medications, whether over the counter or prescription, work by blocking stomach acid and other secretions, when those active stomach ingredients are needed to help our bodies absorb vitamin B12, per mayoclinic.org. Here’s why, as stated previously in this space: “Once B12 is ingested, it binds with the protein in food and then is released to be distributed in our body by the activity of the stomach’s hydrochloric acid and gastric protease. . . . Free vitamin B12 then combines with intrinsic factor, a glycoprotein secreted by the stomach’s parietal cells, and the resulting complex undergoes absorption within the distal ileum by receptor-mediated endocytosis,” per National Institutes of Health (NIH).

OK, that’s some head-scratching scientific verbiage, but hopefully you get our drift – that anything which interferes with your stomach’s role in getting B12 out to everywhere it needs to go in our body carries with it a risk worth looking into.

What Heartburn Medications Are We Talking About?

Per Mayo Clinic, H-2-receptor blockers (H2R’s – examples include famotidine also known as Pepcid and ranitidine aka Zantac) and proton pump inhibitors (PPI’s – omeprazole aka Prilosec and esomeprazole aka Nexium) are the two common types of GERD medications that, to one degree or another, have been linked to a B12 deficiency.

When CBS News did a piece about heartburn remedies and their effect on the body’s B12 absorption, it cited a study of 26,000 California residents with a vitamin B12 deficiency over a 14-year period as well as 185,000 residents with healthy B12 levels, per cbsnews.com.

Of those with a B12 deficiency, 12 percent has been on PPIs for two or more years and about 4 percent had been on H2R’s the same length of time. By comparison, the respective numbers for those without the B12 deficiency were 7 percent and 3 percent, suggesting that PPI’s and H2R’s carried an increased risk of a B12 shortage. However, higher doses were more closely associated with a deficiency than weaker ones, findings which seem to conclude that people should use these drugs for as short a time as they can, and in lower doses.

Like with any medication, a word to the wise is to run use of GERD medications past your doctor, asking for his or her guidance on what medications you should be taking, to include what dosage and how often. “It is a cause for concern, but it's not an emergency for the average person,” said gastroenterologist and Kaiser Permanent researcher Dr. Douglas Corey, quoted at cbsnews.com. “People shouldn’t stop their medication based on this study alone.”

What About Short-Term Use?

It’s important to reiterate, as mentioned above, that such studies have focused on long-term usage by people who deal with GERD/acid reflux issues. In most real-world cases, though, such medications typically are prescribed for a short term – say, up to eight weeks, per Cleveland Clinic – and are therefore much less likely to have a derogatory effect on B12 absorption.

“Clearly, this is a long-term complication,” says Dr. Brian Kirsh, a Cleveland Clinic gastroenterologist. “People who get occasional heartburn, or go on and off these medications, are not likely to get these complications.”