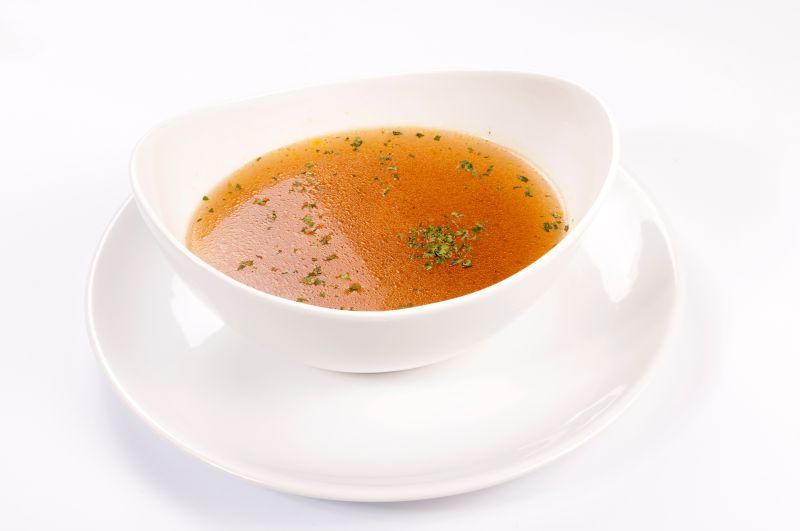 It has long been known as something good for what ails you, something to sip or slowly spoon from a bowl whether you are nursing a nasty cold, battling back from a bout with energy-sapping stomach flu or just in need of something to calm the nerves without creating bodily chaos when trying to crawl out of bed the next morning.

We're speaking, of course, about that age-old elixir, broth, which it seems has been around since the beginning of time, our moms using it as part of their TLC to get our juices reflowing in the right direction. Various forms of broth, also known as stock, bouillon or consommé, actually have been around for hundreds of years, a form of which – bone broth – has emerged in the last year as the newest "re-innovation," reportedly even rivaling the likes of Starbucks as being on the cutting edge of honest-to-goodness hip.

"It's magical," says Marco Canora, proprietor of New York City's East Village eatery Hearth, where workers at his takeout window, Brodo, have been filling and serving up paper cups of bone broth to enthused customers since November 2014. Bone broth usually is made in restaurants or home kitchens by roasting leftover animal bones and then boiling them in water for 12 to 48 hours (Canora says he boils for 24 hours) and mixed with aromatics such as onions, garlics and various herbs. The process, as explained at eater.com, breaks the bones down – essentially liquefying them – which "releases nutrients and minerals, and makes nutrient-rich collagen, gelatin and glucosamine easier to digest."

As long as various broth concoctions have been around, usually tucked away in corners of pantry cupboards for "emergency" use, this might be the first time any sort of broth has achieved superstar status. Alleged health benefits being bandied about by its fans haven't yet been subjected to intense scientific scrutiny, but for now its supporters embrace the smooth-tasting bone broth for its healthy source of minerals such as calcium, phosphorous, magnesium and potassium (according to Melissa Hartwig, a New York Times bestselling food author), as well as the presence of gelatin, which "protects and heals the mucosal lining of the digestive tract and helps aid in the digestion of nutrients," says autoimmune specialist and author Dr. Amy Myers, quoted, like Hartwig, at yahoo.com.

Hartwig also praises bone broth for its collagen, "a protein that breaks down during slow-cooking to form gelatin," which "helps to build healthy skin, hair and nails." Additionally, as Hartwig points out, bone broth's abundance of amino acids glycine (great for calming the mind) and proline, which have no significance presence in muscle meat (the kind that we eat), make it "important for a healthy gut and digestion."

A recent Washington Post story makes mention of a work ("Nourishing Broth: An Old-Fashioned Remedy for the Modern World," by Sally Fallon Morell and Kaayla T. Daniel) that claims broth, or stock, can also reduce joint pain and inflammation and help with bone formation and repair, making it, as they say, a "perfect weapon" for fighting osteoporosis.

There may be a fly in the soup, however, when it comes to all this brothy braggadocio. For instance, npr.org recently reported that bone broth's alleged ability to heal and restore collagen is "probably overblown."

"Since we don't absorb collagen whole, the idea that eating collagen somehow promotes bone growth is just wishful thinking," says William Percy, an associate professor at the University of South Dakota's Sanford School of Medicine. He added, "Bone broth as part of a well-balanced and nutritionally sound diet is probably harmless, but it is not some type of 'miracle food source' with the ability to cure a multitude of aches, pains and diseases all by itself."

Critics also point out that because there is no one set recipe for bone broth, anyone can make it out of whatever animal bones they want, resulting in broth varieties that make it practically impossible to establish its nutritional properties and value.

Bone broth as a cure-all? Probably not, but there will always be sufferers of pesky colds and flus awaiting such a "savior."