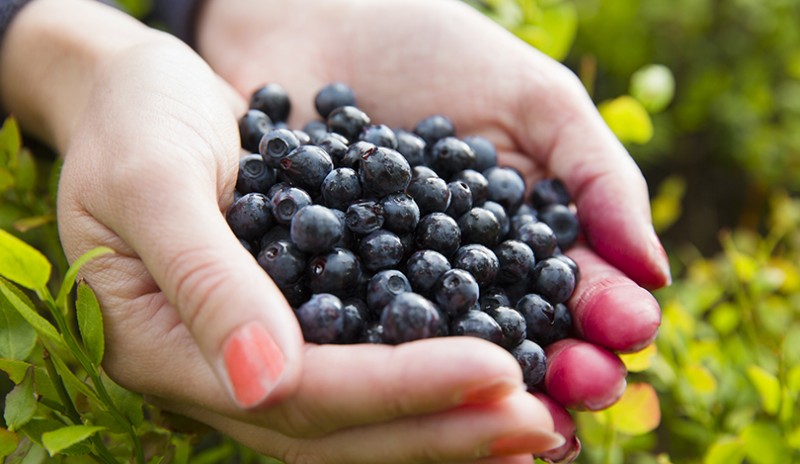 It's well-known that fruits and vegetables are a great starting point for eating healthy. Let's narrow it down and choose a fruit that is readily available in grocery stores, relatively inexpensive, easily added to many basic courses, and can be eaten in almost unrestrained abundance without fear of a bellyache. We're talking about blueberries, of course.

Blueberries are small and malleable, meaning they can be added as an ingredient to pancakes, waffles, and muffins, among other delectables, enhancing the taste and augmenting the health value of foods you already enjoy. Blueberries are healthy and all natural. Not only can they be easily picked, as they can be found growing in many areas, but they can also be purchased ready to eat at the store or frozen, so that they can be stored at home for a reasonable period of time before being thawed out whenever convenient.

Where Do Blueberries Come From?

Per whfoods.com, blueberries have become naturalized to many geographic regions of the world, such as North America, and also to include Europe, Australia, New Zealand and temperate areas of Asia. But North America leads all continents in terms of being home to the most species of blueberries. Note, too, that blueberries are also commercially cultivated and grown in other regions of the world, such as parts of South America and Northern Africa. They're practically everywhere!

What Makes Blueberries So Healthy?

One thing in particular packs blueberries with their health punch . . . as well as their color. That's what is known as anthocyanin, which belongs to a group of plant compounds known as flavonoids, which possess a potent antioxidant effect, per medicalnewstoday.com. Anthocyanin also happens to be what is responsible for giving blueberries their blue hue.

Be careful about storing frozen blueberries for too long. Per medicalnewstoday.com, a study cited at?National Institutes of Health (NIH) demonstrated that blueberries kept frozen in storage for six months reduced the potency of the anthocyanin by 59 percent. So don't keep them locked away for too long.

Additionally, all it takes is one cup of blueberries to provide you with 24 percent of your recommended daily allowance (RDA) of vitamin C. That by itself plays a major role in many of the health benefits afforded by the ingestion of nutritious, delicious blueberries.

It's hard to go wrong eating blueberries, even lots of them. But if you have concerns about health issues or certain prescriptions you might be taking, you should discuss your consumption of blueberries with your physician before making any significant changes to your diet. For instance, blueberries also contain a large amount of vitamin K, which can affect blood clotting, a concern for people using blood thinners such as warfarin, per medicalnewstoday.com.

That said, here are 10 potential health benefits associated with blueberries: