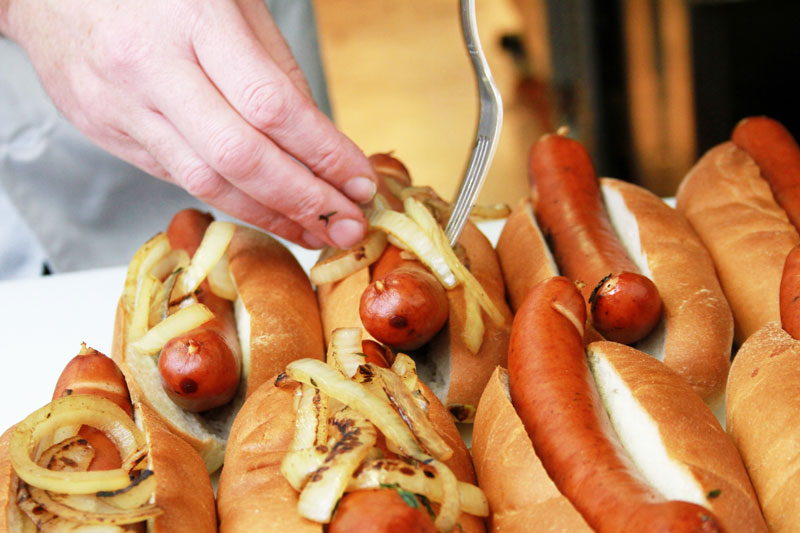 One of the biggest sporting events of the year took place over the Fourth of July weekend, and a new champion was crowned, ending the eight-year reign of a legendary competitor who many consider to be the sport's greatest hot dogger of all time.

No, this isn't about Serena Williams at Wimbledon or Jordan Spieth capturing yet another major golf championship. We're talking about Joey Chestnut, whose eight-year streak of winning the Nathan's Famous International Hot Dog Eating Contest in New York came to an end at the hands – and mouth and stomach – of Matthew "Megatoad" Stonie, who crammed in and gulped down 62 hot dogs and buns in 10 minutes, two more than Chestnut was able to inhale.

For that, the five-foot-8, 130-pound Stonie won his first mustard-yellow belt, although Chestnut's records of 69 hot dogs devoured, set in 2013, remains intact. "I just had trouble," Chestnut said regarding his most recent display of dogged determination. "I was slow, and (Stonie) was eating fast."

Miki Sudo won the women's contest by downing 38 hot dogs to beat out Sonya Thomas, who still owns the female record of 45.

Okay, sports fans, this is one way of honoring July as National Hot Dog Month, which makes sense because this is the favorite time of year for grilling. Hot dog consumption is at its peak in the summer months, especially the holiday weekends. The National Hot Dog and Sausage Council estimates that Americans consume seven billion hot dogs between Memorial Day and Labor Day, with 155 million of those going down the weekend of the Fourth alone. And, face it, what can be better than enjoying a ballpark hot dog while watching your favorite baseball team in action?

So, the questions are, what exactly is it we are putting into our mouths when we eat a hot dog, and just how healthy/unhealthy can it be? Let's start with noted natural health expert Dr. Joseph Mercola, whose hot dog web page says a mouthful: "Hot dogs are one of the most nutritionally bankrupt foods. Yet for decades, they've been given a free pass, granted one pardon after another thanks to their towering status in American culture."

Mercola explains on his website how and from what hot dogs are made, but knowing all the details can make for a queasy stomach. Suffice it to say that a hot dog is made from the by-products of meats – typically turkey, chicken, beef and/or pork– with one hot dog providing a full third of your daily recommended dose of sodium chloride, as well as fillers such as corn syrup, dried milk and modified food starch. Not exactly what you want to gorge on if your goal is to lower your blood pressure or better balance your diet with fruits and vegetables.

According to a 2009 report released by the American Institute for Cancer Research, eating one hot dog a day over your lifetime can increase your risk of colorectal cancer by 21 percent. The Cancer Prevention Coalition says that children eating 12 or more hot dogs a month have a nine times higher risk of developing leukemia, which some experts have linked to the presence in hot dogs of additives such as nitrates and nitrites.

So, still liking that grill of your dreams?

As you might suspect, though, hot dogs do have plenty of fans, even in the nutrition business. This is not to endorse hot dogs as a staple of healthy dietary plans, but according to livestrong.com, citing the Mayo Clinic, hot dogs do provide protein, which is considered key for growth and development, as well as iron, which helps boost your immunity. On the other hand, a hot dog's excess saturated fat reportedly can, over time with consistent consumption, lead to an elevated chance of Type 2 diabetes and heart disease.

If you must have some hot dogs for yourself or the kiddoes, Mercola suggests shopping for uncured varieties without nitrates; choose those which are 100 percent beef, 100 percent chicken, etc.; and avoid those that contain MSG, high-fructose corn syrup, preservatives or artificial flavors or colors. In other words, be really picky, and leave the contest bingeing up to the likes of Chestnut and Megatoad.