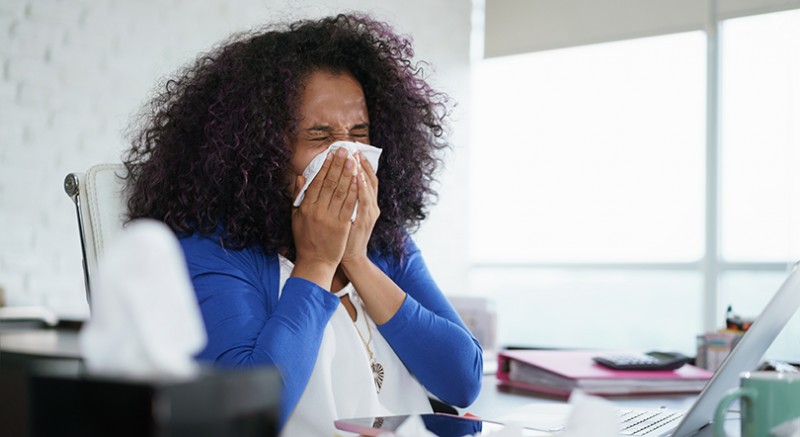 Spring is in the air. So is a lot of pollen as well as other allergens that, for many people, produce the familiar and oh-so-annoying seasonal allergy symptoms of itchy, watery eyes, sneezing, and the occasional nasal drip typically accompanied by scratchy cough. Perhaps some congestion and skin reactions as well.

It’s almost like clockwork: trees start blooming, flowers start budding, homeowners get busy mowing their yards, and next thing you know you’re at the pharmacy buying antihistamines and eyedrops. Seasonal allergies are here. Every year at this time; spring has its version and fall will get its in a few months.

Also known as “hay fever” and, in more medical terms, “allergic rhinitis,” per Mayo Clinic, seasonal allergies affects millions of Americans. One strange twist in all this is it’s easy to wonder where your immune system is when all this is going on – why isn’t it doing its job in protecting you from this misery?

Well, actually, it is doing its job, and doing it too well. Per health.usnews.com, your immune system is overreacting to a trigger or allergen – pollen seems to be a common culprit. Any time a person susceptible to allergies comes in contact with such a trigger, the immune system goes into overdrive, releasing histamine, a chemical that induces the allergic reaction and all those troublesome symptoms

How Do Antihistamines Work?

According to the Centers for Disease Control and Prevention (CDC), there’s really no way to prevent allergies themselves, but the allergic reactions and symptoms can be stopped. Numerous medications available on the market – both via prescriptions and those sold over the counter – have been shown effective in thwarting the body’s release of histamine and alleviating the symptoms. Many, though, can produce side effects, with drowsiness among the more common symptoms.

One suggestion often made by experts for dealing with allergies is to keep your windows and doors closed during allergy season to keep allergens out (as much as possible). That preventive strategy apparently works well, as attested to by this blog’s writer, who typically suffers from spring allergy symptoms for three or four weeks every year. This year, he had already been beset with allergy symptoms when he started noticing them greatly subsiding while being sequestered in his home during the coronavirus stay-at-home period ordered by his state’s governor. However, on those days he went outside for a brisk walk of 30 to 40 minutes (while keeping proper social distance), allergy symptoms would return within several hours after he was back indoors. So he would again stay inside for two to three days, and symptoms would again significantly subside within 24-36 hours. In other words, there is hope for all of us seasonal allergy sufferers.

Following are eight other tips, suggestions, and remedies that could help stave off seasonal allergy’s sting. First, though, if you suffer from seasonal allergies, consider seeing an allergist to get a skin test for the various allergens that could be problematical for you.