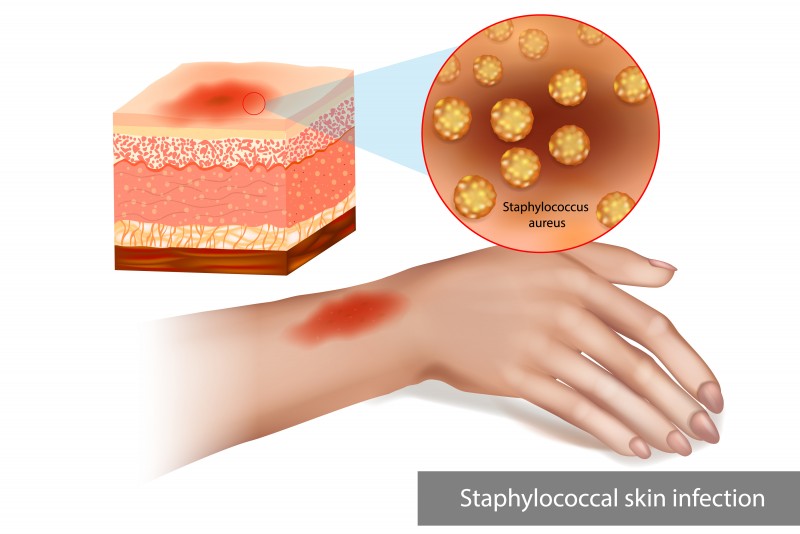 One of the potential health hazards that most of us carry around with us almost all the time is a lurking microscopic bug that is in size that can cause major problems if we are not careful and prepared.

We are referring to the staphylococcus bacteria, which is a type of germ normally found on the skin surface or in the nose of healthy people. It can cause staph infections if it intrudes deeper into our bodies, reaching the bloodstream, joints, bones, lungs, or heart.

This isn’t a dire warning telling people they need to lie awake at night fearful that one or some of these small bugs is likely to push into their body at a moment’s notice to wreak significant damage on a major organ or two. But it is true that increasingly more otherwise-healthy people are developing potentially life-threatening staph infections. Such infections can include skin infections such as boils, impetigo, or cellulitis; food poisoning; bacteremia (an infection of the bloodstream; toxic shock syndrome; or septic arthritis.

The Diminished Role of Antibiotics

A major factor that has made staph infections such a growing concern is their increased resistance to antibiotics. No longer can doctors treat a staph infection with solely a regular dose of antibiotics and expect such treatment to stop the infection in its tracks. Because of the staphylococcus bacteria’s bolstered immunity to antibiotics, which has earned it “superbug” status from health experts, health-care providers have had to resort to alternative means to fight staph and, hopefully, stop it in its tracks.

One treatment that has gained effectiveness in medical circles is administering antibiotics in tandem with nutrients and supplements, such as vitamin B3 and vitamin D. In some cases, vitamin B3 applied to human blood has shown an ability to trigger an immune response that “attacks” the staph bacteria within a matter of hours.

Medical experts, however, have warned against patients stocking up on B3 as a preventative measure. They warn that too much B3 (also known as niacin) can lead to liver damage or ramped-up inflammation sometimes associated with a heart attack. Carefully measured use of B3 by doctors in combination with antibiotic treatments, however, can enhance white blood cells known as “neutrophils” that can attack and even engulf MRSA bacteria.

What Vitamin D can do is strengthen the body’s immunity by stimulating antimicrobial peptides, including LL-37, that possess a natural preventive activity against Staphylococcus aureus. This is especially encouraging when dealing with children suffering from staph infections largely because of a deficiency in vitamin D.

Other Natural Remedies for Staph Infections

Here are some other such natural remedies to at least consider in discussion with your physician when staph infection treatment is in order:

Turmeric: Most effective as a deterrent against infections when ground up into a powder, turmeric – thanks to its chief component curcumin – has long been used in Eastern medicine for its multiple antibacterial characteristics.

Aloe vera: Alexander the Great equipped his soldiers with aloe vera for its effectiveness in stopping bleeding on the battlefield; it also has worked very effectively in caring for various skin issues such as infections thanks to its antiseptic attributes.

Garlic: Also known as Allium sativum, garlic has been recommended for patients with staph infections, with the consumption of actual garlic cloves a preferred recommendation.

Staph infections can produce some rather nasty health issues that beg for antibacterial treatments, but a variety of nutrients, supplements, and other natural remedies can help in that war against these treacherous bacteria.