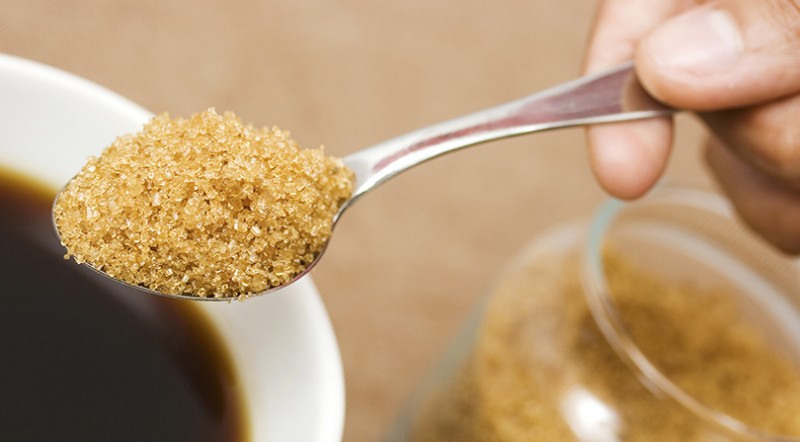 Sugar is a sweet, usually enjoyable, and extremely common ingredient found in many foods. But, as you likely know, there are clear drawbacks to sugar consumption, most notably when consumed in excess. Fortunately, there are a variety of much healthier substitute ingredients available to add sweet flavor to your baked & cooked foods, or to your morning coffee.

If sugar is natural, then it can't be so bad for you, right? Not exactly. There is a big difference between sugar that occurs in carbohydrate form in plant foods (such as vegetables, fruits, and grains), and added sugar, usually present in processed foods, per health.harvard.edu. Sugar contained in natural foods tends to be processed slower by the body, which allows for an even, healthy dispersion of sugar into your cells, and in turn provides energy.

Added sugar, on the other hand, is unhealthy when consumed in excess. Unfortunately, overconsumption of added sugar is extremely common in America. Harvard Health explains that the popularity of added sugar is due to its effect on flavor (who doesn't like food that's tasty?), and its potential in increasing the shelf life of some foods. Per byrdie.com, the addictive potential of added sugar also plays a real part in keeping people craving sugary foods.

Widespread overconsumption of sugar has led to massive patterns of certain health issues, most notably obesity, heart disease, and Type II diabetes, per health.harvard.edu. Harvard Health refers to a recommendation from the American Heart Association that an adult male should consume no more than about 150 calories (or 9 teaspoons) of sugar a day. However, the average among adult men for sugar consumption per day is nearly three times that amount! Given these numbers, it's no wonder that so many Americans have developed health issues that occur as a result of sugar overconsumption.

Before adding one of the following sugar alternatives to your food, it is important that you decide to do so to replace the sugary and/or processed foods that you are used to. Lessening or eliminating sugar from your diet is the foremost purpose of using these sweeteners.

The Sweet Alternatives to Sugar

Stevia powder, commonly just known as stevia, is a sweetener derived from the stevia plant, and is most popular in its powder form. Per byrdie.com, the stevia plant is naturally so incredibly sweet that it eclipses the sweetness of cane sugar by 40 times. Stevia is a no-calorie sweetener, and considering its powerful flavor, a little bit of powdered stevia can go a really long way when added to food. Stevia powder is sold (very affordably) right here on wonderlabs.com as ?Stevita.?

Flavored stevia extracts can be great additions to drinks and some foods. These are often found in liquid form. Strawberry stevia extract and vanilla stevia extract are both excellent options. Like raw stevia powder, these can be quite potent, so be sure to remember that a little bit of stevia goes a long way. Stevia extracts are also sold for an affordable price here on wonderlabs.com.

Fresh fruit is a fantastic, and perhaps easily overlooked, substitute to sugary foods. Fresh fruit contains healthy amounts of natural sugar, and a serving or two a day can be quite satisfying. If you are trying to break the habit of eating sugary processed foods, put strawberries or another fruit centerstage on your kitchen counter. You'll thank yourself later.

Aspartame is a common substance found in diet sodas and other foods. Per webmd.com, aspartame has been well studied, with the FDA declaring that there have been over 100 studies performed that advocate for aspartame as a healthy sugar alternative. Aspartame is made-up of two amino acids, and it is extremely low-calorie. Aspartame in powder form can commonly be found on grocery shelves under the brand name ?Equal.? Some controversy has surrounded the availability and use of aspartame as a sweetener, such as in diet sodas, with critics claiming it is toxic in large amounts, although numerous federal health-related agencies give aspartame a thumbs-up for public consumption.

Monk fruit extract is the final sugar alternative that we recommend. It is one of the ?better sugar substitutes,? per foodrevolution.org. It is a zero-calorie sweetener derived from the monk fruit plant, and is around 150 times sweeter than sugar! It can be found in both liquid and powder forms. In addition to its use as a sugar alternative, it may have antioxidant and anti-inflammatory effects. Since monk fruit is local only to certain environments on Earth, it can be more expensive than other sweeteners, due to import costs. But monk fruit extract is a worthwhile and much healthier alternative to sugar.