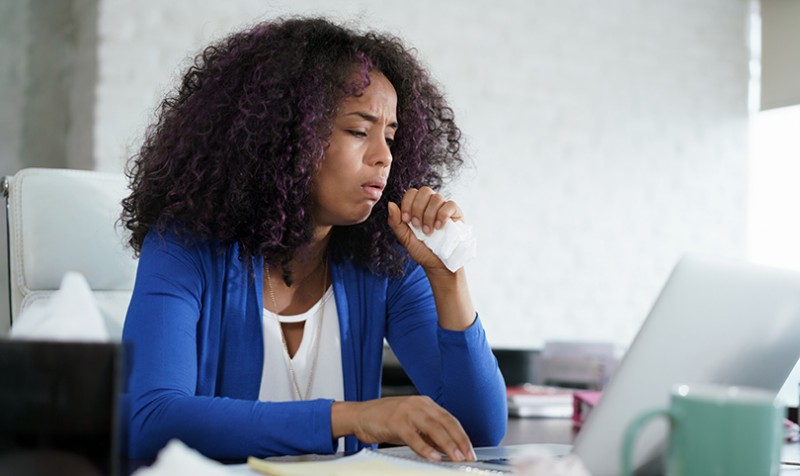 The arrival of autumn, complete with the changing colors of the leaves and a distinct chill in the air, often is accompanied – for many of us – by the arrival of a scratchy throat that can develop into a cough and, ultimately, bronchitis, a condition that involves inflammation of the bronchial tubes. In short, you’re looking at a lot of “hacking” and discomfort that can mean lost work days or time missing school (even if remotely), separate from what’s going on with Covid-19.

That lingering, nagging cough (which often comes with mucus in the form of yucky drainage) is not the only symptom of bronchitis; others include chills, heaviness in your chest, wheezing, nasal congestion, fever, muscle aches and a level of fatigue that can become debilitating.

Bronchitis can be chronic or acute, with the former usually produced by smoking. Bronchitis in its acute form, per health.com, can originate from the same viruses that cause cold or flu and typically are transmitted through the air such as when a nearby person coughs or through physical contact.

Although acute bronchitis can usually clear up in a week or less, it can be a miserable thing to experience during the time that it does stick around. There is no known “cure” for bronchitis or even for significantly shortening its duration, but there are a number of remedies that can help a sufferer get through a case with at least some sense of normalcy.

Following, in alphabetical order, are 10 of the popular remedies for bronchitis. If your symptoms become especially severe or last longer than a week, it’s time to visit a healthcare professional for a proper diagnosis and to discuss stronger treatments available via prescription: